The mandible is the 2nd bone (next to clavicle) to ossify in the body. It develops as intramembranous bone lateral to Meckel's cartilage.

A single ossification centre for each half of mandible arises in the area of future mental foramen, lateral to the Meckel's cartilage where the inferior alveolar nerve bifurcates into mental and incisive branches

1) In infants and children below 5 years of age, the mental foramen is near the lower border and opens below the sockets for deciduous molars. This is so because; the bone is made up of only alveolar part.

3) In adults, the mental foramen opens midway between upper and lower border, because the upper alveolar and sub-alveolar parts are equally developed. The needle should be placed above the occlusal plane as foramen is above the level of occlusion.

4) In old age, both the mental foramen and the mandibular canal are close to the alveolar border.

The angle again becomes obtuse (140) because the ramus is oblique. 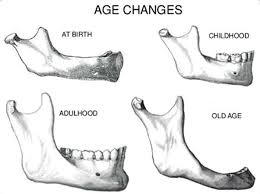